Welcome to Napkin Folding Guide. Here’s the wonderful Goblet Fan Fold in a cup. There is no ironing needed and almost any napkin will do. You’ll fold it so quickly you won’t remember doing it! 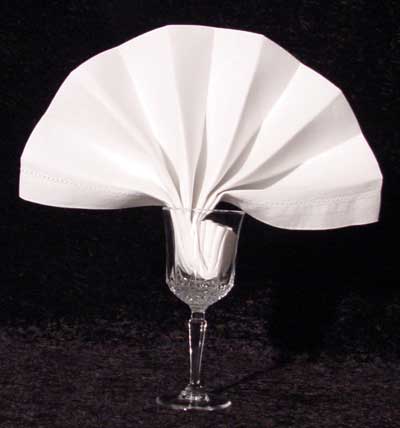 The goblet fan is one of the easiest goblet folds to accomplish. There is no ironing needed and almost any napkin will do.

1. Lay the napkin face-down in front of you.

2. Fold the napkin in half and orient the open end towards you.

3. Fold the napkin into quarters.

5. Finish accordion-folding the napkin and it should look similar the the picture shown here.

6. Firmly grasp one end of the fan and fold it over about an inch, allowing the other end to open up.

7. Place the folded end into your glass and spread out the fan. Use it to cool off your food and amaze everyone with your horrific table manners!